How Our Eating Habits Affect The Environment And Sea Life 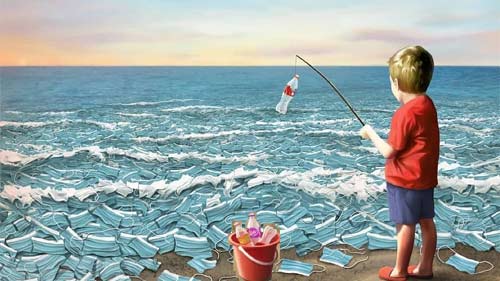 Certainly, the biological chain involves producers and consumers in our ecosystem. And until we see how the food is grown and how we eat how it bothers several factors, we don’t realize how this consumption affects the environment largely. The world demands cheap food such as corn and soy, no doubt that these are a good source of vitamins, but consumption of one type of food demands more cultivation, and further, it contributes to the usage of more fertilizers and pesticides.

Apart from this, some people following non-vegetarian diets also want more protein sources at a cheaper price. The production of milk, eggs, and meat has increased in recent times and consumption, which results in the development of animals in cruel surroundings and the use of genetic engineering to increase the yield. So we, as responsible humans of mother nature, should improvise our deeds accordingly. Most of the human activities are badly effecting enviroment and sea life. Time has arrived when we need to change our living and eating habbits.

Everyone knows that one of the major foods affecting the ecosystem or the environment must be non-vegetarian consumption, as we list; meats of cows, goats, and sheep as herbivorous. So their food needs water, irrigation, and fertilizers to produce animal feed in a higher quality.

They also overfish some of the varieties of fish such as swordfish, bluefin tuna, etc., which increases the sea travel and eventually more emission of fuel wastes. Other than the list of non-vegan foods, some other kinds also contribute to environmental pollution, such as imported foods and highly processed foods. The imported foods require more fuels or fossil fuels to get delivered from a long distance, which affects the environment for sure in one way or another. In contrast, processed food uses more energy than our nature, and it wastes all those for an unhealthy food choice.

Humans are herbivorous by nature, and it has also been studied that an individual consuming vegetarian meal is healthier and stronger than any other non-vegan consuming person. Besides this, it is also considered that a certain person suffering from some disease or malnutrition kid does require some protein source. Still, we all know there are several persons eating nonveg for the sake of eating it, which demands its production i]on a higher scale. Thus, affecting aquatic life to the utmost extent and forcing a cruel environment and genetic engineering affects the environment and the organisms and seems brutally heartless.

Upgrading our diets to save mother nature

We all are knowledgeable enough to identify and rectify our mistakes. And we better know that only humans and their unhealthy lifestyles are responsible for the depletion of the earth in every possible manner. If we get to save our nature only by following a balanced diet, which is, in fact, healthy for us, we should invest our efforts in it. And should help our surroundings release its burden of one certain production along with keeping ourselves fit and healthy.

We should always remember that humans and the major consumers of the food chain have the power to manage biodiversity, pollution, disasters, and all in all, nature only by a proper meal on our plates. Hence show our sensibility, affection, and respect for nature by making a better tomorrow on this beautiful earth.

What Is The Global Impact Of Microplastic Ocean Pollution From Laundry?

9 Delicious Italian Dishes for Any Event

Simple Steps to Cut Back on Your Carbon Footprint at Home