How Do Different Cultures Deal With Grief

One of the most difficult and unavoidable aspects of life is the death of a loved one. In the western world, we often have difficulty with the idea of death and the grieving process that ensues.

In the Eastern world, death has been a part of life for centuries, and so Eastern cultures have a much better understanding of how to grieve. In contrast, in the Western world people sometimes feel guilty for grieving.

Perhaps the best way to overcome grief is to look at things from multiple perspectives.

In this article, we want to show you how a variety of cultures overcome grief – together with the traditions and philosophies that are associated with death.

Due to geographic reasons, “Eastern” is fairly ill-defined. Hence, we chose to look into Singapore as it is home to four exciting cultures: Chinese, Indian, Malay, and Eurasian. It is literally the perfect place to explore traditions and beliefs!

Learn How Do Different Cultures Deal With Grief

The Traditional Funeral Wakes in Singapore

Chinese funeral wakes are an important part of Chinese culture. They are typically held in a house or a funeral parlor. The body of the deceased is laid out in a coffin, which is often highly decorated with flowers. 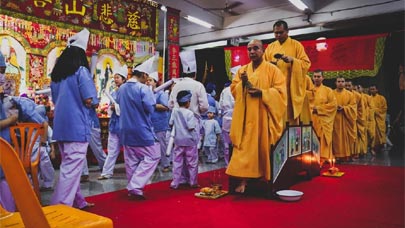 Friends and relatives then offer their condolences to the deceased by praying with joss sticks. Afterward, paper money is also burnt for the deceased. Sometimes, even paper mansions and cars are burnt!

It is customary for a close relative to stay awake with the deceased person through the wake. This is to ward off bad omens.

After the wake, relatives are then transported to the site of cremation/burial where final rites are performed.

This is, however, very different for Chinese Christians. They follow the traditional Christian funeral by having a viewing, sermon, and subsequently cremation. We will review this in the Eurasian section.

There are two main religions that guide the Chinese majority in Singapore. Namely, Taoism and Buddhism. Both have striking differences in their belief systems, however, historically – religions have always been harmonised to form a “major” religion by which everybody believes in.

For Taoism, It’s believed that the soul can transcend to heaven or hell at the time of death. The most important thing is to know if you have done good deeds in your life and if you can escape from punishment.

Only with a good attitude towards life and destiny, Taoism teaches that the soul will be in harmony with nature and one cycle of life will lead to another.

Similarly, Buddhists believe that after death, the soul is reborn in another body.

The Buddhist doctrine of karma dictates that every deed has a consequence and rebirth is based on the consequences of a person’s actions. Hence, the soul can be reborn into unfortunate circumstances if its previous karma was low.

The grieving process is often challenging. But Chinese communities take comfort in the fact that their relatives will always be with them. Watching over them in the form of a moth, or appearing in dreams to comfort them.

Eventually, all souls will have to move on. The Chinese also believe that their deceased relatives would be reborn within the family once again.

Malay funeral traditions are based on Islamic beliefs. The death of a person is believed to be the will of Allah and it is only Allah who knows the true reason for someone’s death. This belief is often reflected in the Malay culture by following the rituals and traditions of Islam. 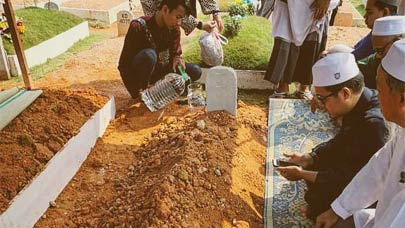 The Malay people believe that the body should be buried as soon as possible after death, preferably within 24 hours. The body is washed and wrapped in white cloth before being buried.

The family of the deceased takes care of all the funeral arrangements, from burial to food and drinks served at the wake. The family will also provide a meal for those who attended the funeral to show their appreciation.

Malays are deeply religious. The Qur’an, Islam’s holy book, teaches that the soul goes on living after death in a conscious state. It is rewarded for the good deeds it did in life and is punished for its bad deeds – this process repeats until the soul reaches perfection.

There are two life spans: one before the resurrection and one after it. In both lives, the person will be undergoing a process of continuous development with periods of happiness and sorrow, success and failure, but with different purposes: The first life is a test for determining whether the person will be worthy to associate with God in heaven; The second life determines whether he will be worthy to become part of God’s divine council, made up of those who possess high moral character.

Malays believe that their deceased’s passing is simply Allah’s plan. They take comfort in knowing that there is a light at the end of the tunnel, as Allah is all-knowing and caring.

Malays often perform Duas (supplication) and practice Sabr (patience) to alleviate their grief. Malays pray for Allah’s forgiveness during such times, repenting for all the misdeeds they have done to the deceased. With this, they actively practice patience by giving themselves time to heal.

An Indian funeral is a multi-day event. The body is bathed and dressed in fresh clothes, and it is placed on a bed of flowers. In the evening, a small service is held where the priest sprinkles water on the body and offers prayers. 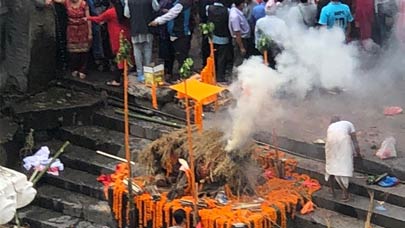 The most important part of the funeral takes place on the last day. Members of the family sprinkle rice all over the body while they offer prayers. Then they put sandalwood paste on its forehead and place flowers at its head to show respect. One by one, family members offer incense sticks in front of the casket that will be burned later to release their loved one’s spirits from their dead bodies.

In Hinduism, the belief in life after death is called “samsara.”

Samsara is a never-ending cycle of birth, death, and rebirth. Samsara is a continuous cycle of happiness and suffering. The law of karma controls the samsara. An individual’s karma dictates where they are reborn in this cycle.

As you may have noticed, Buddhists also believe in karma and reincarnation! This is due to the fact that Buddhism and Hinduism share the same cultural roots. Buddhism rejects the formal rituals and caste belief, opting to encourage meditation to achieve enlightenment.

Hindu families and friends are to mourn for 13 days after the deceased’s passing. They are not allowed to attend religious events or host celebrations.

Immediate family members are to mourn for a year. This period will allow families to openly express their grief and melancholy. It is part of their culture to visit the deceased’s family home to provide comfort and solace. It is believed that the positive karma derived from visiting the bereaved family can ease the soul’s transition into reincarnation.

Eurasians have played a big role in Singapore’s history. Many are of Portuguese, Dutch or English descent, mixed with mostly local Chinese and Malay populations.

You could very well compare Eurasians to the Mestizo populations of Central and South America.

Hence, to say that Eurasians have a singular religion is misleading. However, the majority are Christians or Catholic.

Eurasian funerals are often done in the traditional Christian manner – much like the Christian Chinese. First a viewing is held at a funeral home or church, subsequently, a sermon is held by a clergyman. Afterward, the deceased is either cremated or buried.

The Bible teaches that when people die, God gives eternal life to those who believe in Jesus Christ as his Son and Lord. The Bible also teaches that the saved will enjoy new bodies, free from disease and physical pain, which never grow old or die (Isaiah 65:18; 1 Corinthians 15:42-54).

When someone dies for eternity, they are with the Lord in Heaven (2 Corinthians 5:8).

Eurasians typically deal with grief much like how European Christians do. A Christian belief is that death is not something to be feared. It’s often seen as a natural part of life and a way for those who have lived their lives well to be reunited with God. 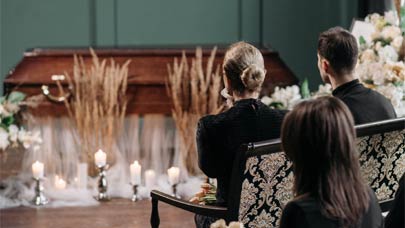 Families find solace in the fact that their loved ones have moved to someplace better. With Eurasians, there is no set mourning period unlike the cultures mentioned before.

We hope that this article has broadened your perspective on life and death. Perhaps this provides solace for your sorrows or opens up your perspective on dealing with grief. Do not be afraid to talk to a friend or your loved ones, as that is still one of the most effective ways to deal with grief! We find that doing so can turn sorrow into appreciation at times.

What Types Of Issues Can Rehab Help With?

What Does the Bible Say About Saving and Giving Money?

How Can You Know What Will Happen In Your Future?

10 Factors to Consider Before Opting a Drug Rehab Center