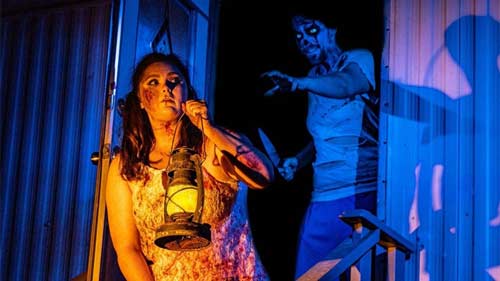 We all love a good scary movie now and then. And thanks to the wild field of the genre itself, there are many ways a scary movie can be made: spooky, gory, a dreadful sense of terror, or shocking moments that make you jump out of your seat.

But despite its wide variety, scary movies have a lot of typical scary “tropes” – aka, signs – that are constantly reused over and again. Some do it well; others don’t. No scary movie would be complete without one, two, or at all of these classic tropes.

With the help of our local spooky-creators, The Halloween Store, we have these five classic scary movie tropes you must know about.

Do you notice that every victim running away or hiding from the killer, spirit or vengeful monster finds themselves with no cell phone coverage? Or that their cell phone battery dies just as they’re about to make the call? Yeah, in modern-day horror flicks, it happens way too often.

It wasn’t always the case, as cell phones are only relatively new, so old classics didn’t have this tired trope being used in every possible instance. What makes it so bizarre is that most people use smartphones, and the reception is pretty good anywhere you go.

You can also add tripping downstairs, mirror jump-scares, “splitting up,” and “don’t go there” to the tired tropes that always seem to happen.

Why is it always the kids that are the scariest? Maybe because it has something to do with children being innocent, but turning out to be horror that is unleashed is unsettling.

To say that the child is the main culprit is now a tried and tested answer to many films. You probably need several hands to count the number of films in which children were terrifying; The Shining (1980), Sixth Sense (2001), and The Ring (2002) are just some of the favourites.

It’s a great method to unsettling your audience, particularly with kids emerging from morbid moments. But only if it is done right and with purpose.

We should also add scary dolls to this list because, yeah, they’re just generally freaky.

The Diverse Group of Teens

The jock, the cheerleader, the bimbo, the weed-smoker, the nerd – you name it, if it’s a teen slasher, this classic group of misfits will all have to appear together before slowly making the chop.

While films over the years have slowly moved on from the Breakfast Club mixture, there are many flicks out there that still adhere to this group dynamic.

This makes it even funnier because groups like this don’t tend to exist in day-to-day life. If you want to enjoy a spoof of this trope, try the comedy, Scary Movie (2000). It nails it on the head.

Of course, this trope leads to its most famous one…

There always has to be a survivor at the very end. Whether it’s a boy or girl (usually the nerd), it doesn’t matter. But the horror story can’t be told unless there is a person left to tell it.

In most cases, the survivor is the lead character, who empathizes with the audience, and is always the smartest cookie in the room. They usually kill, destroy or conquer the threat with their brains, and probably because everyone else died before they did.

One last jump-scare or twist is now part of the horror film parcel. You need the audience to get freaked out one more time or be blown away by the horror that just appeared. That’s why most flicks include the last hook to get you in (and possibly set up a sequel).

But is it worth it?

Well, it really depends on the twist. If it makes sense with what transpired on the screen and the story, then the revelation is worth it. If it’s just a scare for its sake and makes no sense, the film basically just annoyed the audience. We always hope for the former.

Emily Stuart is an experienced and independent content writer for some popular online communities.

How to Throw a Corporate Party on a Budget

Is Piano Really Losing Popularity Among Musicians and People?

How to Read Guitar TABs and Notation: A Beginner’s Guide

Sax Guide: How to Fix the Saxophone Octave Key